It's intriguing to speculate why p53 regulates the cardiac transcriptome and the ATIP gene, at least to transcribe ATIP1 a human isoform of the Angiotensin II AT2 Receptor Interacting Protein? The gene's different names describe its various functions including; Mitochondrial tumor suppressor 1 (MTSG1) or Microtubule-Associated Scaffold Protein 1 (MTUS1). Expression of MTUS1 was reported lost in various types of human malignancies such as colon, ovarian, head-and-neck, pancreas, breast cancers, bladder, gastric, and lung cancers.

AT2 is a receptor associated with Renin-Angiotensin System (RAS) and vasodilation that confers potential benefits in pathogenic conditions. It is not highly expressed on Natural Killer (NK) cells, but has been detected and was shown in a rat model of myocardial infarction to reduce injury and have dampening effects on inflammation. The AT2 receptor, in combination with ATIP1 is also reported as a tumor suppressor. New experimental evidence showed interaction defects between ATIP1 and two mutant forms of the AT2 receptor identified in cases of mental retardation. The studies point to a functional role of the AT2-ATIP1 axis in cognition.

p53 is a major transcription factor and the TP53 gene is the most mutated in cancer. It has been the extended subject of this blog and our research into relationships between p53 and Natural Killer cells. Our interest is p53 genetic signatures used to select specific diseased cells to co-culture and educate NK cells that can be applied as custom, target therapy against various diseases.

As reported in a previous blog entry, RAS is a cornerstone of blood pressure which has been directly implicated in Coronavirus patients whose NK cells have also been severely depleted. Transcriptomic analyses identified several immune pathways and pro-inflammatory cytokines induced by SARS-CoV-2 infection evidencing a sustained inflammation and cytokine storm. Pathway analysis revealed that patient’s lymphopenia may be caused by activation of apoptosis and p53 signaling pathway in lymphocytes. 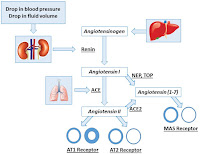 If, as reported the RAS of NK cells contributes to the control of blood pressure via the localized ratio of AT1:AT2 expression. Then, in the capillaries of tissue micro-environments the delicate balance of vasoconstriction<>vasodilation signaling may be exploited by NK cells scanning the affected cells to deliver their innate inflammatory response. Cytokine directed vascular changes that effect local blood pressure may be another varied contributor.

So, with these time-bound, localized, micro-pressure effects in progress how does an innate NK cell go about killing an infected target that may have also motivated its AT1:AT2 response? AT2 was found to be an AT1 antagonist, which adds complexity to the function and ratio effects of this diverse protein. ATIP is an agonistic factor of AT2 to exert opposing effects to AT1, such as organ-protective and anti-inflammatory effects. We know ATIP's including ATIP1 binds AT2's cytoplasmic tail and impacts signaling that results from Angiotensin II (AngII) binding AT2's extracellular domain. We also know p53 transcribes at least ATIP1 and that ATIP3 is directly implicated in microtubule organization.

ATIP1 has been previously reported to localize either at the mitochondria or the Golgi. These apparently discordant results might be reconciled if ATIP1 were a microtubule-associated protein. Indeed, mitochondrial organelles are highly enriched on microtubules that ensure their intracellular transport. On the other hand, the Golgi apparatus is located at the nuclear periphery close to the microtubule organizing center (MTOC). ATIP1 might thus associate with microtubules and provide a direct link between the AT2 receptor at the cell membrane and the cytoskeleton.

The prospect that RAS related signaling and p53 are tied in both lymphocytes and broader cell biology is tantalizing. Among the cellular signaling pathways, p53 plays a prominent role in RAS. Activation of p53 increases Angiotensin and AT1 expression. Conversely, AngII activates p53 pathway to mediate its downstream cellular effects. Mechanically, stretch-mediated release of AngII induces myocyte apoptosis by activating p53 that enhances the local renin-angiotensin system and decreases the Bcl-2-to-Bax protein ratio in the cell.
In Cardiometabolic Disease pathogen-associated, molecular pattern–mediated metabolic reprogramming can be considered a manifestation of innate immune signal reprogramming a conserved phenomenon that changes how we think about the biology and function of the innate immune network including indispensable acetylation that destabilizes p53 and its inhibitor MDM2.

In Coronavirus patients, SARS-CoV2 binding ACE2 receptors may modify processes associated with the ACE2/Ang-(1-7)/Mas axis and acute, chronic inflammation, including reported leukocyte influx. The mechanical stretch of vasoconstriction<>vasodilation could cause AngII to activate p53. Therefore, if SARS-CoV2 impedes the AngII-ACE2-AT2-ATIP1 pathway that under normal circumstances in NK cells may direct microtubules to form an immune synapse for target killing, then the rapidly multiplying virus binding ACE2 may simultaneously render NK ineffective and by mechanical-stretch affect cardiomyocytes by p53 activation, which would lower AT2 ratios, including in vascular epithelial cells to induce apoptosis or G2/M cell death. A potent cocktail indeed!
Posted by Kevin Bermeister at 9:31 PM