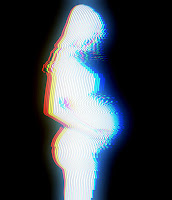 Cellular biology is viewed through different lenses, but pregnancy offers a perspective on the invasive origin of cell division, the senescent state and cancer. Pregnancy causes Natural Killer cells of the decidua (dNK) to expand abundantly until they represent as much as 30% of the mucous membranes' cells. NK cells may be induced to expand by invading trophoblasts to realize the dNK trifecta - robust innate immunity that protects the embryo from maternal infection, modulation of trophoblast invasion and driver of vascular remodeling. However, in many cancers expansion of diverse NK populations fails to materialize and missing sub-sets of NK cell diversity provides a path for cancers unchecked growth.
In decidual cells at the human maternal-fetal interface, CD82 - the metastasis suppressor may participate in intercellular communication with trophoblasts and limit their invasiveness. Trophoblasts enhance adhesiveness of dNK to the decidua's stromal cells, via the CXCL12/CD82/CD29 signaling pathway which contributes to CD56bright NK cell enrichment a necessary element for heathy pregnancy.
CD82 expression is downregulated in tumor progression of many human cancers and strongly correlated with tumor suppressor p53. It can be activated by p53 through a consensus binding sequence in the promoter. In human ovarian cancer a sequential genetic change at the TP53 and the CXCL12 receptors CXCR4  locus occurs during transformation of surface epithelium. Basal CXCR4 promoter activity in HCT116 colon carcinoma cells deleted of p53 was10-fold higher compared to that in parental HCT116 cells with functional wild-type p53.
The CXCL12 ligand is unique for its CXCR4 receptor and both are expressed in human first-trimester endometrial epithelial cells (EECs) at the mRNA and protein level. EEC-conditioned medium and recombinant human CXCL12 significantly increased the migration and invasion of EECs. CXCL12 has also been associated with the recruitment of CD56bright CD25+ dNK subsets in early pregnancy's.
CXCR4 is specifically upregulated in the human endometrium during the implantation window and increased immunostaining observed only when a blastocyst is present. CXCR4/CXCL12 not only enhances trophoblast invasiveness, but also limits over-invasiveness by upregulating CD82. CXCR4 activation increases the CXCL12-CXCR4 signaling axis stimulates vascular endothelial growth factor (VEGF) synthesis which induces CXCR4 and CXCL12 production. This synergistic regulation influences placental vascularization. CXCR4 suppresses apoptosis and increases the viability of trophoblasts.
Undetectable disseminated tumor cells, in different tissue microenvironments restrain or allow the progression of breast cancer in the liver where in dormant milieu's there are selective increases in NK cells. Stroma crosstalk and exit from dormancy follows a marked contraction of the NK cell compartment and concurrent accumulation of activated hepatic stellate cells (aHSCs). Proteomics on liver co-cultures implicate aHSC-secreted CXCL12 in the induction of NK cell quiescence through CXCR4. CXCL12 expression and aHSC abundance are closely correlated in patients with liver metastases and were inversely correlated with NK cell abundance.
The dNK behavior that checks trophoblast invasion and promotes vascularization resembles immediate and invasive new cancers that may occur in cells of any tissue environment. Similarly expansion of resident tissue NK sub-sets in response may be the determiner of life, the shape of next generation cells, dormancy or death.
Posted by Kevin Bermeister at 7:19 PM No comments: