Death or Sex? Cancer through Reproduction

Sex in humans can be traced to the evolution of a Sea Squirt and FuHc, a surreptitiously named gene. But, sexual pursuit didn’t initiate diversity of life, immunity from death did! In a previous article I explained how allorecognition in Sea Squirts, from different colonies resembled polarization at the contact point of an immune synapse between a Natural Killer cell (NK) and its target. 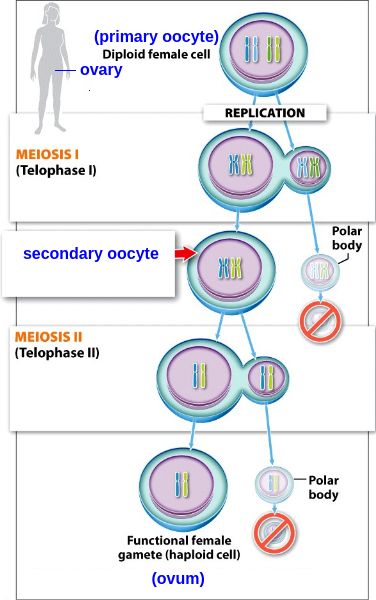 In early stage reproduction an “immunological paradox” occurs at the implantation site in the uterine wall where unexpectedly the (male fertilized) blastocyst is not rejected. Allorecognition occurs because maternal NK invades and remodels maternal blood vessels before the arrival of trophoblasts, the external cells of the blastocyst that carry male antigens, during formation of the placenta that provides the fetus with nutrients.

Sperm and ovum require gametes which are produced during meiotic cell division through phases of cellular polarization. Telophase (see image) resembles NK bound to its target cell just before the irreversible step that leads to perforin release and the target’s death. In this first Telophase, the yet to be separated pre-gametes contain twice the number of chromosomes, similarly when NK is enjoined to its target. Curiously, the inhibitory and activating NK receptors that bind target cells diversify only through meiosis where in gametes the centrosome required for polarization has degenerated.

During meiosis as every gamete was made, research showed the first enzymatic step in meiotic recombination provoked a transient burst of p53 activity. Now it seems equally possible these p53 bursts could be attributed to relaxed transposon (mobile DNA) controls that accompany the meiotic process. Indeed, meiotic double-strand breaks are the proximal trigger for retrotransposon eruptions including in animals lacking p53.

Mature NK can kill its target cell when combinations of inhibiting and activating receptors mediate a ‘non-self’ condition that triggers its polarization. At that point cytotoxic perforin and granzyme release toward the contact point, but NK can cancel the process. Reduced perforin release and binding in the immune synapse between these bound cells underlies the age-related decline in NK cytotoxicity. NK polarization and more generally cells undergoing division may also contribute to our understanding of ageing.

Here, we propose that certain features of the ageing process such as: (i) the increased reactivation rates of latent Mycobacterium tuberculosis, (ii) the slower resolution of inflammatory responses and (iii) the increased incidence of bacterial and fungal infection are attributable in part to an age-associated decline in NK function.

This paper demonstrated a pronounced age‐related impairment in perforin mobilization by NK to the K562 (target cell) contact point. It suggested that defective polarization to the immune synapse underlies the reduction in perforin secretion observed with age. The activation of mitogen‐activated protein kinases (MAPK) is critical for lytic granule (perforin-granzyme) polarization, granule exocytosis and NK Cytotoxicity. It is possible that these proximal signalling events are compromised by aging. In addition, it found that the studied p53 mutants regulated MAP2K3 gene whereas ectopic expression rescued the proliferative defect induced by mutant p53 knockdown.

Experimentally, NK that are absent of perforin or granzymes remain engaged five times longer. These locked-up NK cells would normally move to their next cell target to clear senescent or diseased cells, but cannot. NK suffering age-related reduced perforin release remain engaged awaiting a death signal from the target. This delay could be the single physiological cause of old or diseased cell accumulation in the body that is a primary cause of ageing. Perhaps polarization is causal?

Interestingly a member of the cytoskeleton superfamily Talin1 has been uniquely tied to two essential NK functions; 1. activation of LFA1, required for binding ICAM on NK target cell and, 2. NK polarization that results. We know overexpression of talin head activates LFA-1 and talin1 promotes cell proliferation by affecting the expression of BCL-2 family and p53 network. But, mdm2 the conserved nemesis of p53 is neutralized by Merlin, another cytoskeleton superfamily protein required for polarization. p53 also regulates the highly conserved Cdc42 which effects adhesion, actin cytoskeletal dynamics and cell movement including for angiogenesis in developing tumor microenvironments.

Furthermore, invalidation experiments demonstrate that PIF’s effects on placental apoptosis were mediated by TP53. Interestingly, the non-cancerous tissue associated with the over-expression of NK inhibiting ligand PCNA is the deciduas, and the only known NK cell subset that constitutively expresses NKp44 receptor for PCNA ligand is decidual NK cells. The PCNA gene is induced by p53 in the process of deciding cell fate, if PCNA is present in abundance in the absence of p53, DNA replication occurs.

However, fetal platelet antigens that cause miscarriages have been shown to prolong uterine/decidual NK survival, elevate NKp46 (LY94) receptor expression, perforin release and trophoblast apoptosis. The same receptor was also found to cluster at the NK-target cell immune synapse to regulate cytoskeletal organization and NK polarization on which perforin release is dependent.

Several common villous cells are implicated including NK, trophoblasts, vascular tip cells and cancer cells that may also induce NK to chaperone their effecting or replacing endo-epithelial cells lining host blood vessels. In the presence of senescent cells including NK with reduced perforin release, cancer cells may have discovered a trophoblast related back door to remodel blood vessels to serve transformed cells that ultimately grow to become cancerous tumors.

It’s distinctly possible that this p53 tug-o-war may be central to cellular age, death, reproduction and growth influenced by polarization and the perforin related effectiveness with which NK kills its meiosis evolved non-self targets.

At Precision Autology, the parent company of Codondex, we discover a patients p53 cell signatures to select their specific cancer cells, educate their natural killer cells to identify and kill the cancer that induced NK into its cooperative state.
Posted by Kevin Bermeister at 8:37 PM