Synapses By p53 And CD40L in Reproduction and Immunity 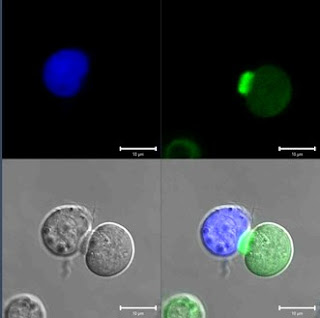 Cell membranes constitute a diverse range of lipid molecules each attached to a varying, odd or even length hydrocarbon chain (a tail) that, collectively pack together to form a membrane. Packing is a dynamic that generally occurs according to surrounding pressure, concentration, hydrophobic conditions and motion. The mix of molecules and their hydrocarbon chains in each membrane play a crucial role in determining functions of complex organisms in cells.

Two complex membrane bound organisms of eukaryotic cells are mitochondria - primary provider of ATP energy powering reactions of the cell and endoplasmic reticulum (ER) - protein folding organelle surrounding the nucleus. The mitochondria comprise a double membrane containing electron transport chains - sets of four membrane bound proteins which pump protons between inner and outer membranes to maintain optimal inner mitochondrial membrane pressure through which oxygen is metabolized into water by phosphorylation of ADP to ATP molecules, which are the basic energy unit of the cell.

ER is a convoluted extension of the nucleus membrane into which translated amino acids are transported and where they fold before being released and packaged in the golgi apparatus and cytoplasm. The process of translation, folding and transport requires significant energy as such mitochondria and ER are closely associated. Recently and for the first time C18 ceramide transportation between ER and outer mitochondrial membrane was described as a cellular stress response mechanism.

Another important membrane lipid C16-ceramide was found to tightly bind within the p53 DNA-binding domain. This interaction was highly selective toward the C16 ceramide acyl chain length with its C10 atom being proximal to Ser240 and Ser241. This binding stabilized p53 and disrupted its complex with E3 ligase MDM2 leading to the p53 accumulation, nuclear translocation and activation of downstream targets. The p53-MDM2 axis has been extensively covered in previous articles describing allorecognition, reproduction, immunity and auto-regulation. Ser241 was the only residue that interacted with all three p53 DNA sequences (p21, puma and a non-specific DNA system) persistently, indicating that Ser241 is a [response element] sequence-independent H-bond donor/acceptor for DNA.

It was also determined that Folate stress induces apoptosis via p53-dependent de novo Ceramide synthesis and up-regulation of Ceramide synthase 6 [C16], which is a transcriptional target of p53. In particular, Folate metabolism affects ovarian function, implantation, embryogenesis and the entire process of pregnancy. We observed that folate withdrawal leads to CerS6 up-regulation and C16-ceramide accumulation in a p53-dependent manner as a pro-apoptotic cue.

It has been demonstrated that clustering of the CD40 receptor depends on reciprocal clustering of the CD40 ligand, which is mediated by an association with p53, a translocation of acid sphingomyelinase (ASM) to the cell membrane, activation of the ASM (enzyme for ceramide), and a formation of ceramide. Ceramide appears to modify preexisting sphingolipid-rich membrane microdomains to fuse and form ceramide-enriched signaling platforms that serve to cluster CD40 ligand. Genetic deficiency of p53 or ASM or disruption of [C16] ceramide-enriched membrane domains prevents clustering of CD40 ligand. If the ligand is membrane-bound, the contact site between clustered ligands and receptors forms an immune synapse.

Here we have demonstrated a relationship between p53, C16 ceramide in reproduction and immunity via CD40 receptor-ligand in membrane bound concentrations of cells, particularly in respect of immunological synapse formation and blastocyst implantation. This further supports the notion that immunity and reproduction share common innate origins linked by p53.

Posted by Kevin Bermeister at 2:03 PM