Natural Killer to Kill or Transform?

In one of my previous articles, Natural Killer Shaping A Life I began to track processes supporting the unified origin of reproduction and immunity based on the theory of allorecognition.

Preceding implantation, the zygote divides to 16 cells that differentiate into an outer cell layer, trophoblast, and inner cell mass, embryoblast. The trophoblast becomes the fetal portion of the placenta, the embryoblast the embryo. Once differentiated into 30 cells a fluid-filled central blastocyst cavity forms. At about the 6th day of development, once it has reached nearly 100 cells the blastocyst mass begins its journey through the uterus to implant in the endometrium, which is where the embryo develops. 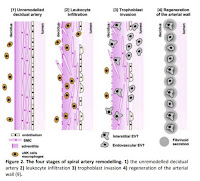 Implantation of the blastocyst is dependent, in part on a feto-maternal, immune handshake in which maternal NK cells of the Decidua (dNK), lining the Uterus are coerced by invading villus trophoblast cells to express cytokines that transform epithelial vascular cells in the placenta to release their binding enabling trophoblasts to replace them and  connect embryo to maternal blood supply  without rejection. This delicate phenomena is responsible for successful pregnancy.

Following implantation, once cells of the inner embryoblast mass differentiate, only the cells of the yolk sac ultimately become the source of the NK cell of interest here. The other progenitor NK cell is sourced external to the yolk sac and that may also be basis of their functional differences.

The varied function of these dual sourced NK progenitors is transformation, as evidenced in trophoblast invasion, or killing damaged cells by cytolysis which the name "Natural Killer cell" describes. The dual source of the "killer" variety is thought to impart a WNT signaling influence over NK cell lineage. WNT-independent (WNTi-) and WNT-dependent (WNTd-) processes were found to distinguish the NK ontology. NK cells, biased toward degranulation and cell killing have been traced to the yolk sac, which remains isolated from rapidly differentiating external cells of the embryo until, over multiple weeks it gets fully absorbed.

dNK cells play an essential role in tissue and blood vessel transformation of the developing placenta. This has promoted an advanced body of thought that suggests certain tissue resident NK cells that possess some dNK characteristics may also be responsible for blood vessel transformation to accommodate new cancer or cancer stem cells that require new blood supply to develop into tumors. Therefore, cancer resident NK cells that, like dNK also express HLA-G or possess other trophoblast stem cell like characteristics may transform epithelial cells lining blood vessels in similar ways that connect fetal cells to the maternal blood supply without immune rejection.

To determine whether NK's varied ontology can shed any light on cancer cells coercing NK cells for tumor development and expansion, we identified the only three major gene expressions that are distinguished by their WNTi origin and which may inform about NK in adult mechanisms. Since our interest at Codondex is centered on p53 we correlated it with these genes:

1) NFIL3/E4bp4 transcription factor controls the commitment to NK lineage, directly regulates Eomes and ID2, which is responsible for P53 gain of function by suppressing ID2.

HLA-C is the only NK signaling molecule expressed by trophoblast cells that by a polymorphism can present variation for Adaptive immunity. Reduction of NK cytotoxicity was directly tied to the volume of Ets dependent expression from the site of the HLA-C polymorphism.  Further, Ets1, which is expressed in all NK ontologies, is necessary for a CBP/p53 transcription complex and transcription in UV-induced apoptosis in embryonic stem cells where the absence of p53 resulted in a high rate of embryonic malformations.

A possible scenario begins to emerge that near fully cytotoxic NK cells that bind HLA-KIR inhibiting and activating target cell receptors may be coerced to transcribe HLA-C, to express more inhibiting polymorphic or activating non-polymorphic transcripts, therefore greater or lesser Ets1 availability to coregulate XBP1 targets or CBP/p53 as the tipping point of degranulation and target cell killing.

Posted by Kevin Bermeister at 1:53 AM