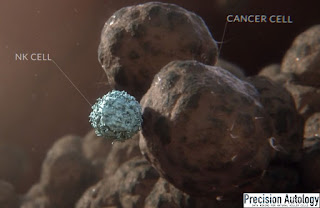 Natural Killer Cells (NK) are much more than cell killers! They possess mechanisms and sensitivities that among many functions has enabled them, at the front line of reproduction to interact with incoming trophoblasts that invade the uterine wall where NK cells perform functions that are critical for blastocyst implantation and pregnancy. NK are members of the innate immune system, but they can be licensed to kill and re-purpose cells whereas most innate immune cells directly target invading pathogens.

Maternal decicdual NK may be redirected by PreImplantation Factor (PIF) expressing, anti-apoptopic, extra-villous trophoblasts that invade the endometrium (epithelioid) of the decidua of the uterine wall. This may result from epithelial LIF expression, and LIFR(eceptors) critical for blastocyst implantation. LIF allele's may act as a NK switch, the direct result of a p53 promoter allele that targets specific LIF transcription that alters NK interactions with trophoblasts, the host endometria and vascular epithelia. If so redirection of NK is an essential mechanisms of conception that underwrites the development of the placenta.

Studies have revealed p53 targets LIF and demonstrated that, as a secreted protein LIF can function through the Stat3/ID1/MDM2 pathway to negatively regulate p53. Selected alleles in SNPs in LIF, Mdm2, Mdm4, and Hausp genes, each of which regulates p53 levels in cells, are also enriched in IVF patients. This association of SNPs in the p53 pathway with human fertility strongly suggests that p53 regulates human reproduction. It is distinctly possible enriched SNP's invoke regulation that negatively affects p53 which may also be the mechanism by which NK switches between modes that kill or transform its cell targets. In implantation, levels of p53  may lead to pre-eclampsia a condition that is the direct result of increased, p53 dependent apoptosis in extra-villous trophoblasts.

Pathogen-associated molecular, pattern–mediated, metabolic reprogramming can be considered as a manifestation of innate immune signaling reprogramming, a conserved phenomenon that changes how we think about the biology and function of the innate immune network.

The mode of NK, in response to cancers may determine the fate of its target either by the binding of innate receptor combinations that initiate an immune synapse and perforin-mediated cytolysis or the release cytokines and chemokines that alters the inflammatory response. It was recently demonstrated these combinations are varied by different tissue and disease depending on p53 for example, in lung adenocarcinoma NK limited target killing and reduced inflammatory response allowing the cancer to spread. Further, peptides derived from p53 are presented by class I MHC molecules and may act as tumor-associated epitopes which could also be targeted by p53-specific T cells.  Results show that selected p53 mutations altering protein stability can modulate p53 presentation to T cells, leading to a differential immune reactivity inversely correlated with measured p53 protein levels.

These complex tissue dependent modes through p53 pathways that contribute negative or positive feedback loop's have prevented the most mutated gene in cancer from itself becoming a target of drug or immune therapy. Using a novel approach Precision Autology's Codondex algorithm computed the variable state of p53 isoforms, using a relative vector distance from the consensus to select patient cells for co-culture with, at least autologous NK for use in customized therapy. The approach will enable approved labs to identify highly specific cell targets, in part by their p53 state and to educate autologous NK cells based on a single p53 measure so that NK precision can be calibrated via the mismatch of target receptor combinations and p53.

Posted by Kevin Bermeister at 11:38 AM