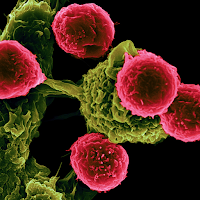 A previous series, about p53 culminated with "Blastocyst Development - A Perfected Cancer Model" that focused on the parallels in angiogenesis, triggered by blastocyst implantation and progression of tumors beyond ~1mm. Now, a recent study has found that conventional Natural Killer cells (cNK) control vascular remodeling in the uterus during pregnancy by acidifying the extracellular matrix (ECM) with a2V-ATPase that activates MMP-9 that degrades the ECM. Ablation of a2V-ATPase decreases Bax and p53 expression in testis and leads to implantation failure in the female mouse. The degrading ECM releases bound pro-angiogenic growth factors that contribute to Uterine artery (UtA) remodeling characterized by the loss of vascular smooth muscle cells (VSMCs) and dilation of the vessels. Without cNK, the UtA never lose VSMCs and UtA resistance remains high often leading to implantation failure.
Its logical that a timely flood of angiogenic growth factors, previously stored in the ECM would provide instant availability, but whether this explains the maternal-embryonic immune paradox remains to be determined? In the immune paradox maternal NK cells invade and maternal blood vessels are remodeled just before the arrival of trophoblasts, the external cells of the blastocyst, that carry male antigens during formation of the fetal placenta. A sudden flood of angiogenic factors preceding invading trophoblasts could provide the perfect environment required for maternal arterial/vascular remodeling.

Lymphocytes in the uterine lining (decidua) are dominated by a unique decidual natural killer (dNK) cell population. The dNK cell surface phenotype CD56bright CD16− CD3− and macrophages CD14+ CD206+(dMac) support a model whereby dNK cells, capable of killing extra-villous cytotrophoblasts (CTB), are prevented from doing so by neighboring macrophages thus protecting the fetal cells from NK cell attack. Existing research has centered on the function of the abundant and diverse sets of dNK, but now that cNK cells have been identified to play a more significant role, our understanding of the remodeling are likely to change.

In CTB exogenous p53 is able to down-regulate MMP-9 promoter activity, but endogenous p53 is not able to regulate MMP-9 expression in first trimester CTB cells. Inactivation of p53 through mutation is the most common trait in cancer. By loosing its onco-suppressive activity, p53 becomes oncogenic in almost all malignant tumors (Soussi and Lozano, 2005). Although p53 is not mutated in the human placenta, it has become functionally incompetent. Understanding why and how p53 is functionally incompetent in CTB might well be the key to understanding trophoblast invasion.

Downregulation of EMMPRIN (BSG,CD147) by p53 leads to a decrease in the activity of MMP-9 and an inhibition of tumor cell invasion. Upregulation of EMMPRIN seen in many cancers can be attributed to, at least in part, to the dysfunction of p53 and thus provides new evidence for the roles of p53 in tumor development and progression. Epithelial derived MMP-9 exhibits a novel defensive role of tumor suppressor in colitis associated cancer by activating MMP9-Notch1-ARF-p53 axis. MMP-9 mediates Notch1 signaling via p53 to regulate apoptosis, cell cycle arrest, and inflammation.

The inter-activity of p53, cNK and MMP-9 are complexed, but this novel research may lead to the mechanisms by which arterial remodeling occurs after release of angiogenic factors from ECM. If that shares characteristics of NK invasion into developing tumor micro environment's a new therapeutic approach may arise.

Posted by Kevin Bermeister at 8:43 PM